An avid sailor for years, Jim Feldkamp has explored the waters around the coasts of America and beyond, experiencing the best sailing routes the world has to offer. Here, he shares with readers five of the top sailing destinations he’s discovered in the United States.

Sailing isn’t for everyone, as experienced sailors like Jim Feldkamp tell us that it requires strength, know-how, and determination in the often-unpredictable ocean waters. However, sailors are also quick to share their love of the sea and the one-of-a-kind experiences they’ve had while navigating sailing vessels using the wind as their guide.

Jim Feldkamp has long held a passion for sailing and has traveled to some of the world’s most exotic destinations to cruise along. Below, he shares five of his personal favorite sailing destinations here in America.

The weather in Hawaii is relatively the same throughout the year, providing warm sailing conditions with plenty of Pacific wind to fill your sails. Besides being one of the most beautiful and iconic sailing destinations in the world, Hawaiian islands like Maui are surrounded by strong trade winds that may prove to be a difficult challenge for novice sailors. However, if they can manage, Jim Feldkamp says they’ll sail across some of the most beautiful seas anywhere in the world.

Key West is made up of a chain of islands jutting off the southernmost edge of Florida. The water is always warm there and full of sea life such as coral reefs and dolphin pods, making it an ideal sailing destination for any level of sailor. Key West also has plenty of options for chartered sailing or rented vessels, making sailing there just as laid back as the locals’ lifestyle.

Jim Feldkamp says this is the premier sailing destination on the East Coast and it even boasts the self-proclaimed title of ‘Sailing Capital of the World.’ The waters off Newport, RI are filled with sailors year-round who enjoy the charming houses along the coastlines and the historic structures like old bridges and lighthouses. The area is also known for hosting Olympic sailing trials before the official games begin.

Sunny California offers plenty of tourist cities and iconic coastlines for sailors looking for adventures both in and outside of the water. Wildlife in the Californian waters include seals and schools of beautiful fish as well as frequent appearances by migrating whales. The rocky shore, high cliffs, and periodic caves make the Channel Islands a top destination for boaters of all types.

Closer to Canada in the north than any other sailing destinations on his list, the waters there are typically frigid between November and April when the mainland is experiencing its winters. However, the San Juan Islands remain mostly dry during this time. The landscapes off the coastline are truly unique and the dark, chilly waters in the north offer a different style of sailing altogether.

“America has plenty of prime sailing destinations with plenty of options for beginners, experts, and everyone in between,” says Jim Feldkamp. 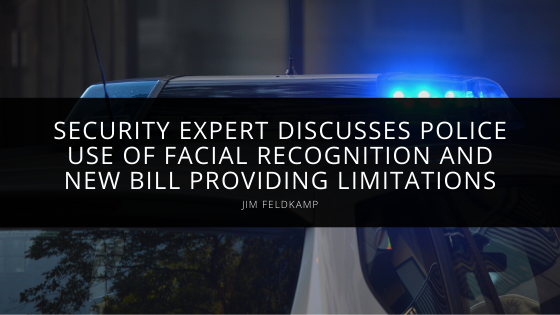 Jim Feldkamp has had a lengthy career serving in the military and working for the Federal Government in a handful of capacities, becoming an expert on topics such as national security and cybersecurity in this time. Here, he discusses recent concerns over police use of facial recognition and what lawmakers are doing to protect civilian freedoms.

Facial recognition is no longer the stuff of science fiction, Jim Feldkamp tells us. It’s used across the globe today to unlock our phones, scan faces of travelers as ticket verifications, screen crowds at large events and concerts, and more. The police have even used facial recognition technology in recent years to crack down on criminals, though it has stirred a lot of unrest with the public.

“There’s no doubt that this technology can help us tackle cold criminal cases and do things like help families find missing children faster, but at a price,” says Jim Feldkamp. “Facial recognition technology isn’t perfect and comes with its fair share of biases, computational mistakes, and concerns over individual freedoms.”

Today, US law enforcement officers use the tech to identify suspects––such as in the case of the Capital Gazette newspaper office shooter––and confirm leads in routine criminal investigations. Screenshots from security footage can be used to search for individuals accused of crimes in computer databases and potentially locate their whereabouts. Some counties report using facial recognition technology as often as a thousand times or more each year.

Jim Feldkamp tells us that officers also use photos either provided by security footage or elsewhere to lookup potential suspects in jail booking databases. The process only takes seconds and can provide a number of leads to police. In the past, manually searching through databases without the technology could take anywhere from days to weeks and months.

There’s a major flaw in the technology, though.

“Facial recognition systems today have a difficult time appropriately identifying racial minorities, women, and youth,” says Jim Feldkamp. “Some reports put their error rates as high as 1 in every 3, which is a stark contrast to the 1 percent error rate for white males.”

Feldkamp believes that people who build these systems––whether they realize it or not––may create algorithms that include their own biases. And beyond this glaring problem, he says agencies have the potential to use the tech to passively spy on people without any reasonable suspicion or consent. All of this has stirred up worry among civilians and lawmakers, many of whom want to ban the technology entirely.

“A new bill introduced in the Senate earlier this week may ban law enforcement agencies from using facial recognition tech,” says James Feldkamp. “The bill proposes a moratorium on using the technology until a commission recommends guidelines and limitations for government use. Because it’s not always accurate, and because there’s so much room for abuse, this new bill will help us avoid encroaching on First Amendment rights and impacting civil liberties. Whether we can actually settle on unified national guidelines, however, will be the real question.” 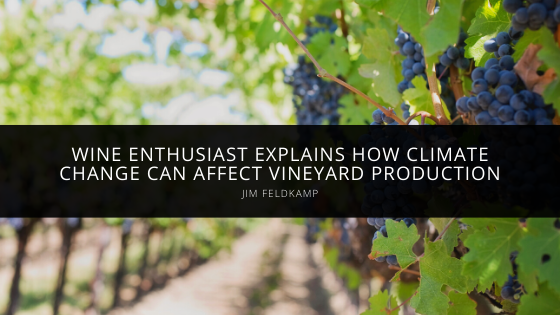 Jim Feldkamp has sampled wines from the richest valleys in Napa to the hills of Italy and beyond, developing a firm understanding of the wine production industry. Here, he explains how changes in global temperature may hinder the growth of certain grapes in vineyards around the world.

As Jim Feldkamp has learned in recent years, wine grapes are very sensitive to alterations in temperatures, especially in the major swings of the seasons. However, a new pressing problem has risen: climate change, with rising temperatures having a negative effect on vineyards everywhere.

“The impact of climate change affects ecosystems across the globe, affecting crop productions just as dramatically as it affects natural animal and plant life,” says Jim Feldkamp. “Recent studies have shown just how sensitive wine grapes are to rising temperatures, which can mean that wine-growing regions may shrink in the near future.”

The study Jim Feldkamp references was recently published in the peer-reviewed journal Proceedings of the National Academy of Sciences. In it, the study states that if the global temperature rises by less than 4 degrees by the next century, the areas that are suitable for growing wine grapes are likely to shrink by more than 50%. If the rise in temperature reaches 7 degrees or more, than as much as 85% of those lands would no longer be sufficient to produce quality wines.

The study in the Proceedings of the National Academy of Sciences was conducted by combining long-term records with global data on international vineyards and croplands. The different wines studied included cabernet sauvignon, chardonnay, merlot, pinot noir, riesling, sauvignon blanc, and syrah.

The sensitivity of grapes to climate change has been recently compared to canaries in coal mines that once detected poisonous gases early on, which would kill unsuspecting miners. Many are calling the shifts in the environmental stability of vineyards an early warning sign of what may be in store for future crops everywhere.

Jim Feldkamp and other wine enthusiasts are now aware that warmer grape growing areas like Spain, Italy, and Australia will likely face the biggest changes with increased temperature. Because these areas produce some of the most beloved and well-known wines in the world, climate change can have a tremendous impact on the global supply.

Apart from affecting how many crops can be produced, climate change would also affect the quality of wine in many areas (typically excluding colder wine-growing regions like Germany and the U.S.). However, some specialists have proposed a novel plan to correct or at least balance out the impact of climate change.

“There’s hope that by switching up the varieties of grapes grown in these areas, we can reduce the total amount of loss,” says Jim Feldkamp. “In addition, the areas that aren’t as affected can begin growing foreign types of wine grapes to compensate. Although wines won’t come from the lands they’ve been known to in the past, this can hopefully save as many of the variety of wines we enjoy today.” 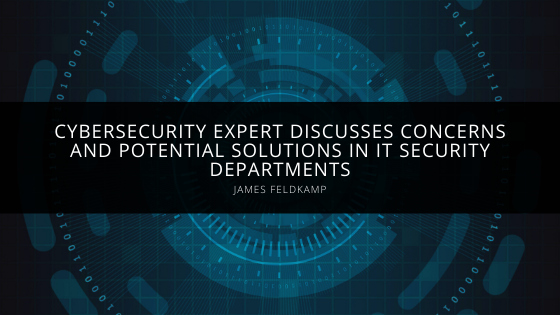 Having worked in cybersecurity during both his military career and his professional career with the Federal government, James Feldkamp has developed a thorough understanding of present concerns, threats, and solutions in information security. Below, he shares how certain businesses are enhancing their IT departments to safeguard their company from attack.

James Feldkamp’s career stretches back three decades with much of it spent working on high-level security projects for the Federal government. An expert in cybersecurity, he often discusses pressing topics in information warfare and champions new initiatives to strengthen security measures in businesses and organizations across the country.

“Advances in technology during the past twenty years have provided countless benefits to businesses and corporations,” says James Feldkamp. “Today, they can make vital company decisions based on large sets of data analysis. Machines automate production in warehouses, and software and AI programs use digital means to improve processes across the board. Unfortunately, all this reliance upon these technologies has created new vulnerabilities, especially in information technology.”

Today, information security plays an essential role in the overall organization strategy of major businesses, and they must restructure their plans to focus on preventing data attacks to remain successful. One of the growing ways corporations are approaching this situation is by separating IT Security departments from the umbrella IT departments. Most times, this gives cybersecurity experts greater independence from leaders who may not understand present threats as clearly and more power to make decisions on their own judgement.

However, James Feldkamp warns that in order for the separated departments to succeed, they both need great communication between them. Among other things, this will help cybersecurity professionals keep informed of IT initiatives and continue making suggestions to better protect company data.

Regardless if the two departments remain one or not, Feldkamp says risk assessment and management should remain at the forefront of all business initiatives––especially in information departments. Doing so helps businesses find a balance between minimizing potential risks while exploring new solutions and opportunities. He suggests business leaders task their Chief Information Security Officers with calculating cybersecurity risks as well as participate in larger processes to share their insights.

One of the largest problems facing information security is a lack of qualified cybersecurity personnel and overly high expectations of candidates. Without new candidates filling in roles in information security, companies leave plenty of room for attack. Often, they expect their new hires to have an immediate effect on their processes, which requires high and select skills from candidates. On the other hand, companies may also fear hiring under-qualified or average candidates who may end up leaving after training for a better paying position.

“We need new solutions in information security, undoubtedly, but we also need a compromise between businesses and the expectations placed on new hires,” says James Feldkamp. “And I think we need stronger communication between departments in addition to more support from CISOs on top-level strategy initiatives.”